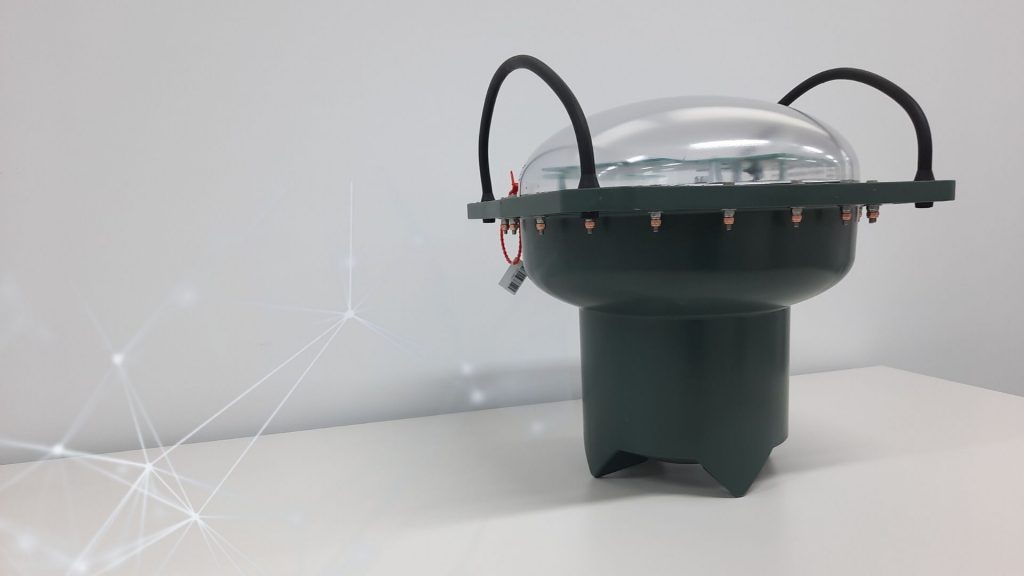 • The buoy, which has already been tested in all three oceans, can differentiate commercial fish from other biomass.

• Marine Instruments launched the first satellite buoy in 2005 and has been the world market leader ever since.

Marine Instruments, a company based in Spain and world leader in the development and manufacture of technology adapted to the marine environment, launches the M3iGO the first satellite buoy for fishing that incorporates Artificial Intelligence. A real milestone for the Galician company and, by extension, for the fishing sector: it represents the introduction of a disruptive technology that will mark a turning point in efficiency and sustainability for the industry. Its development has been possible after four years of uninterrupted work and investment by the R&D department, an area that accounts for 40% of Marine Instruments’ staff, which currently has 160 employees.

Marine Instruments’ engineers set out from the outset to transform the massive data provided by the digitisation of the sonar and the new computing capabilities into decisive information for skippers. To do this required creating new algorithms, processing them and training the neural networks over an extended period of time. And, furthermore, the goal was to provide this information at the exact moment the user requested it, i.e., in real time. Thus, the new M3iGO was born, a buoy conceived, designed and manufactured entirely by Marine Instruments, capable of accurately calculating the quantity of commercial fish below it, discarding non-commercial fish and other noise from the biomass calculation.

It was a challenge. The development of artificial intelligence requires the learning of mathematical skills and the development of algorithms over a long period of time, based on observable data from the past. In other words, it takes time, history is required and a high capacity of study. A development with continuity that consumes resources and that has been made possible by Marine Instruments’ firm commitment to innovation, which invests 8% of its revenues in R&D&I every year. It has been years of progress on a well-established roadmap, which included numerous field trials and tests in the three oceans, Atlantic, Indian and Pacific, until the final product was achieved.

More in depth: while the previous models have an analogue sounder, the new digital sounder and the new microprocessor in the M3iGO allows huge amounts of raw data to be collected, analysed and processed, so that the skipper receives filtered and accurate information on the tonnes of commercial fish below the buoy. With the new M3iGO, the skipper is able to make a faster, more efficient and sustainable decision, impacting both economically and environmentally.

Other projects that the company is developing in parallel and that work with Artificial Intelligence and neural networks have also contributed to making the disruptive technology incorporated in the new buoy possible. This is the case, for example, of a project in collaboration with AZTI, the Basque benchmark technology centre for the marine environment, which works on the identification of tuna species and another for the planning of optimal fishing routes, a background that Marine Instruments has added when developing the new M3iGO.

In addition to Artificial Intelligence, there is another notable innovation. The M3iGO is a buoy that is always open, i.e., it transmits information in real time when the user requests it. This evolution also aims to help the skipper save time by offering him only the information he needs when he needs it.

If its interior is a revolution compared to the previous model, the M3i+, the exterior of the new buoy is an evolution of an enclosure that continues to be a reference of robustness and durability in the market, incorporating a new solar panel that provides enough energy for the buoy’s rechargeable batteries to always be at their maximum level.

In parallel, Marine Instruments is also launching an update of its MSB+, the buoy management and oceanographic information software. Adding the vision of the R&D team and the experience of fishing skippers, the software has incorporated future oceanographic data forecasting and new layers of hypoxia, waves or clouds. Users will also enjoy new visualisations designed to save the skipper time, presenting the content in a clearer and richer way, offering at a glance the estimated quantity of commercial fish under the buoy and providing specific data on its position such as depth range or temperature.

For all these reasons, Marine Instruments, with a presence in 30 countries, is a world leader in the development and manufacture of electronic equipment adapted to the marine environment and focused on intelligent oceans and sustainable fishing. In addition to maintaining a firm commitment to continue providing highly innovative technological tools to the tuna sector, in recent years Marine has been successful in the development of technologies for other sectors such as aquaculture or security and defence.