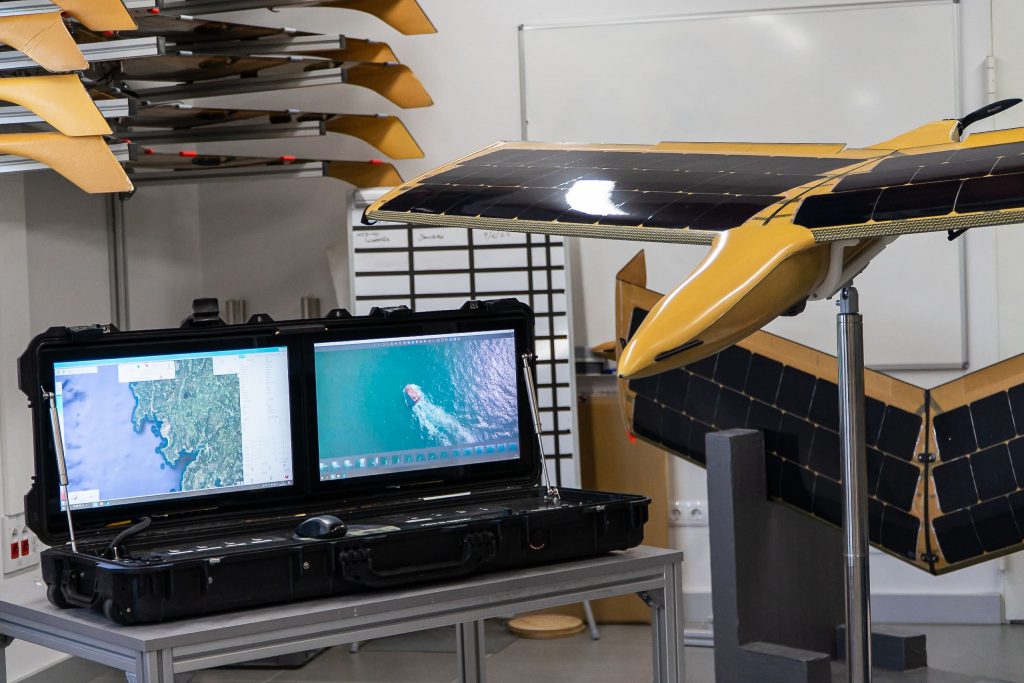 The Sapanish Navy has closed with Marine Instruments, a leading Spanish company in the development and manufacture of marine technology, the purchase of three M5D-Airfox UAV systems. This acquisition, valued at 1 million euros, represents the culmination of the national and international exercises that the maritime UAV system has been carrying out with the Navy since 2021 and which, phase by phase, it is successfully completing.

The delivery will be carried out in two parts, the first one has taken place this December 2nd, in which Marine Instruments has delivered all the systems to the Navy; while, in a second phase, scheduled for 2023, the Galician company will carry out all the operational installation of the systems in the ships, as well as the training of the military personnel.

These three systems (each comprising an aircraft, radio link and on-board control station) will be specifically at the service of the Mine Action Force (MCM), to monitor the sea and the coast, as naval mines continue to be a lethal and low-cost weapon capable of collapsing maritime traffic and, consequently, land traffic. In this case, the MCM did not so far have its own air support tools to provide a free zone for transit and subsequent disembarkation, hence its interest in this type of technological solution based on unmanned aircraft.

Proven experience in tests with Spanish Navy, NATO and US Navy

The Navy’s purchase is the result of numerous ISR mission support exercises, as the great versatility of the M5D-Airfox allows it to effectively take on military surveillance, tracking and detection operations of targets and objectives.

For example, as part of the RAPAZ programme, promoted by the Directorate General for Armaments and Material (DGAM), the drone has successfully completed the first two phases and will begin a third phase in 2023. Through this programme, several improvements have been made to the product, as well as several flight campaigns both on board Navy ships and at the EA’s UAS school at the Matacán Air Base. Some of these improvements have already been implemented experimentally during the participation in the 22nd edition of the REP MUS that took place in Portugal last year, where the M5D-Airfox was installed and operated from the Navy’s BAM AUDAZ during its participation in the DYNAMIC MESSENGER 22 exercise, organised by NATO. The embarkation was done simultaneously with other national remotely manned surface systems, previously integrating the systems into the ship’s own combat system, the SCOMBA.

In addition, in February 2022, the M5D-Airfox participated in the Cutlass Express 2022 international exercises at the direct invitation of the US Navy and successfully completed the various tests proposed in the Red Sea. Similarly, in 2022, the M5D-Airfox successfully completed various tests during the Esp Minex-22 exercise, also organised by the Navy, contributing to the detection and deactivation of simulated naval mines around the ports of the Balearic Islands and their approaches.

In the civilian sphere, Marine Instruments has signed a two-year coastal surveillance contract with the Ministry of Agriculture, Fisheries and Food for the detection of illegal fishing. The company, based in Nigrán (Pontevedra), was awarded the contract to deploy a MRVP service using a drone over national territory.

A drone suitable for ISR missions

The M5D-Airfox is a solar-powered unmanned aircraft, specifically designed for use from naval platforms and to operate from the sea. It has a range of up to 10 hours and a range of 18 nautical miles. Its features also include a maximum speed of up to 45 knots and a full HD video camera.

This innovative UAV, with great performance and autonomy, is stealthy and lightweight, weighing only 4kg and with a wingspan of 2.5 metres. It can be hand-launched or launched by shuttle and landed by net, both with the ability to land while the ship is moving. The solar panels not only give it a zero-carbon footprint, but also allow it to achieve an autonomy of more than 10 hours of maximum sunshine. Moreover, the system itself is simple to operate and has a high degree of automation.

Marine Instruments also has special authorisation from the Spanish Aviation Safety Agency (AESA) to carry out UAS surveillance operations out of visual range and without the need to request approval for each flight (BVLOS).

Marine Instruments is a world leader in the development and manufacture of electronic equipment adapted to the marine environment, always from a responsible point of view with the protection and conservation of the oceans. For this reason, the design and industrialisation of its products is carried out 100% in-house, without outsourcing any production process, which reduces the environmental impact to a minimum.

The Galician company is strongly committed to research and development in order to offer the most advanced products to its clients. In fact, the company has a continuously growing workforce. Marine Instruments has been awarded the National Innovation Award 2022 by the Ministry of Science and Innovation, which will be presented in February 2023 by King Felipe VI.